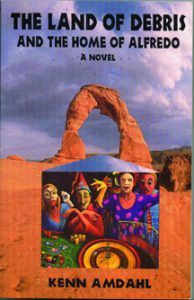 This quirky and funny novel has become a cult classic, for the tiny cult of folks who have read it. If you like Sherman Alexie or Tom Robbins you might like it.

A young man walking near an Oklahoma highway realizes to his surprise that he doesn’t remember who he is. Yet he knows that the white van approaching him means danger. He manages to evade the van and make his way to a gas station where a stranger gives him a ride to a house whose odd occupants seem to know him.

From there he follows the path of least resistance into the world of rock and roll superstars, big time drug deals, Las Vegas mafia, and voodoo rituals in the Louisianna swamps, all the time trying to recover the life he’s forgotten. His only clue is a phone number, but when he calls it, the garbled voice says that the number he has reached, ‘the land of debris and the home of alfredo,” is no longer in service.

Despite its relatively modest sales, this book has garnered more enthusiastic fan mail for Kenn than all the rest of his books combined. A pattern has emerged, however: the only folks who love it are the ones who’ve actually read it.

The book is most famous for being the first novel ever printed on tree-free paper made from the kenaf plant, an African annual now grown in Mississippi. It’s acid-free, chlorine-free and recylable. Because the paper isn’t made in huge quantities, it was four times as expensive as regular paper. Clearwater did not raise the price of the book to reflect that. We had to buy the paper directly from the manufacturer, convince a printer to use it, ship it to the printer and pay extra fees for them trying this strange new stuff. We’re delighted we could help this fledgling industry along.

“.. .a wild ride down the oft’ pot-hole filled highway of enlightenment…”

“The Land of Debns is much more than your typical journey into self-discovery. What separates it from its twitching, self-absorbed kin on the shelves is a true poignancy, an insight into what we love and what we hate, what we forget and what we want to be forgotten. Plus, if you read this book, you will live like a rock star and ride on the back of a dinosaur.”

“I am glad to see that companies such as Clearwater Publishing are putting forth the effort to produce more environmentally friendly products. We are excited about your work.”
Kathleen A McGinty, Chair, Executive Office of the President, (Clinton)
Council on Environmental guality

“”The Clinton-Gore Administration and the Federal Government encourage the development and use of alternative technologies, particularly effords such as Clearwater Publishing Company’s which have the potential to create business and employment opportunities while enhancing national, regional and local economies. I encourage and appreciate your efforts and I hope that you will enjoy continued success in this worthwhile endeavor.”
Fran McPoland,
Federal Environmental Executive