Revenge of the Pond Scum: Searching for the causes of Alzheimer’s Disease, Amyotrophic Lateral Sclerosis (ALS) and Parkinson’s Disease 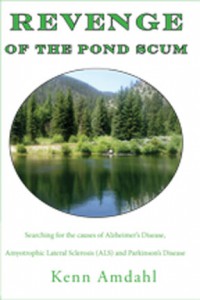 When a friend was diagnosed with a disease very much like Amyotrophic Lateral Sclerosis (ALS), Kenn Amdahl became curious about this strange disease that killed Lou Gehrig and crippled Stephen Hawking. Like many nonscientists, he began by doing some research on the Internet. At first, he was amazed at how little is known. Gradually, he became fascinated by all that is suspected, and by the various lines of investigation. He wound up learning a lot about this disease, as well as others that may be related, including Alzheimer’s Disease, Parkinson’s Disease, MS and autism. He also learned a lot along the way about odd things like cyanobacteria, cycad trees, fungi, antibiotics, vitamins, and the suspected role of various toxins both natural and man-made.

Amdahl treats the whole thing as a mystery to be solved, not a crisis to be frightened of. In fact, the book reads a bit like a mystery novel told with constant wonder and occasional humor. Some paths have nothing at all to do with the diseases, but are included because they fascinated the author. He imagines a TV series about B vitamins and a movie about the discovery of penicillin. He talks about tree snakes on Guam, excitotoxins in our food, the inflammation process and some exciting new developments in science and medicine.

If someone you know has been diagnosed with one of these diseases, and you are the type of person who studies things when they enter your life, this book may provide an easy introduction to some of the fascinating theories. It may well save you a lot of time. It won’t answer all your questions,  but then no one can do that yet. It doesn’t advocate any one theory, and the author isn’t trying to sell you some package of vitamins or snake oil. It’s an easy, nontechnical read by a guy who has written books for beginners on topics like calculus, algebra, electronics and creative writing. A dozen well-known scientists and doctors have read the book (or the parts that relate to their specialties) to ensure that the more complex stuff is accurate.

It may well appeal to people with no specific interest in these diseases at all, but who just like learning quirky bits of science that haven’t made it to the national media yet.

Revenge of the Pond Scum is now available as a Kindle book on Amazon.com

and as a paperback book:
http://www.amazon.com/Revenge-Pond-Scum-Alzheimers-Amyotrophic