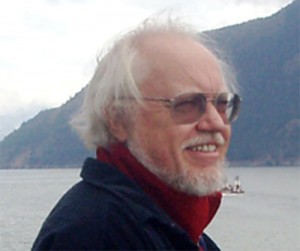 Kenn writes books, poetry and music and runs Clearwater Publishing. His nonfiction books include There Are No Electrons: Electronics for Earthlings, Revenge of the Pond Scum (about the causes of neurological diseases like Alzheimer’s)  and Joy Writing: Discover and Develop Your Creative Voice. He’s the co-author (with Jim Loats, Ph.D.) of Algebra Unplugged and Calculus for Cats. His novels include The Land of Debris and the Home of Alfredo and Jumper and the Bones. His poetry has been published in over fifty journals.

He formed Clearwater Publishing in 1990 to publish There Are No Electrons and became something of a pioneer in the self publishing industry.

His book The Land of Debris and the Home of Alfredo was the first novel to be published on tree-free paper made from the kenaf plant, for which he got some fleeting notoriety among the ecologically conscious.

When no one’s looking he teaches creative writing classes for local community colleges. From 2004 to March 2006 or so he co-hosted an author interview show called “Off the Page”on local cable TV, featuring authors such as Bruce Cameron, Connie Willis, Barbara Steiner, Francine Mathews, Leslie Kane, and many others.

He’s played guitar for forty years and is starting to get the hang of it. He’s written countless songs and played on several albums (that’s what they used to call CD’s when they were much larger and black) and on a few local TV commercials. From 1990 until about 2004 he played and sang in the acoustic group“Cottonwood” which released two CD’s that included several of his original songs. Over a hundred radio stations around the world aired their music. Now he plays in his basement.

Kenn wasted a good deal of his youth in commercial real estate, but has seen the light and given up the addiction of “making money” in favor of folk music, writing books, and publishing. But every now and then he still feels a craving to pay his bills on time. He breathes deeply and pretty soon the urge passes.

He lives with his wife and high school sweetheart, Cheryl, in Broomfield, Colorado.

Kenn was interviewed in 2004 by Jenna Glatzer, editor in chief of Absolute Write. We have copied the interview here. He thought it cool when Dean Kaman, inventor of the Segway, recommended Calculus for Cats the New York Academy of Sciences radio show.

Jim Loats is a professor of mathematics at Metropolitan State College of Denver Colorado. He is the co-author of Algebra Unplugged and Calculus for Cats.

Beyond being an excellent and inhumanly patient instructor, Jim plays a mean tuba. He also plays dobro, pedal steel guitar, and acoustic guitar. He attends the Walnut Valley Festival, an annual bluegrass event in Winfield. Kansas with a faithfulness that borders on the pathological.

Jim plays dobro and sings in the group Just Desserts.

After his wife Dee, sailing is Jim’s first passion. If he’s not  manipulating an algorithm or teaching, and the lakes aren’t frozen, you’ll find him leading the wind across the water in his boat, a huge grin on his face and a loud laugh ready to explode from him. 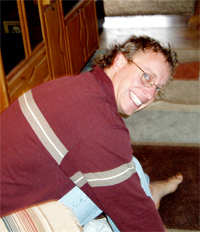 Paul is Kenn Amdahl’s oldest son. His degree in philosophy from the University of Northern Colorado prepared him well for fishing. Even a bad day of fishing is existential in some way, and a good day is a mystical celebration.

Paul has been lifting weights for so long he has become dangerously strong, and his father defers to his opinion even when they both know father always knows best.

He also plays guitar. Playing with the Halleck Street Ramblers in Washington exposed him to Dixieland jazz for the first time. Left to his own devices, he tends to play jazz.

An artist and lover of art, Paul lived for several years in New York, and visited virtually every art museum in the city. Then he moved to Washington State for a change of fish. But wherever he hangs his hat, he follows the Denver Broncos, Colorado Avalanche, and Colorado Rockies. And now the Washington Huskies.

Carol  has a BA in English from Sonoma State University and an MFA in creative writing and literature from Bennington College. After years as a technical writer, she now devotes more of her time to her creative muse. She is the author of Forgotten Heroes and Villains of Sand Creek, Notorious Jefferson County, and her short fiction has appeared in numerous literary magazines. She lives in Colorado, writes a history column for the Broomfield Enterprise and maintains a Colorado history blog.