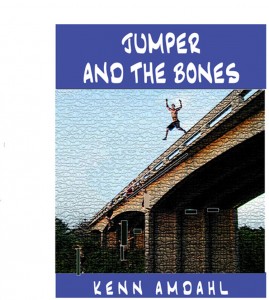 Humorous contemporary fiction. In the tradition of Huck Finn, a big-hearted but uneducated 28 year old narrator (nicknamed ‘Jumper’) tells of his adventures protecting Holly (the nurse who lives upstairs in his building) from a dangerous gang (“the Bones”). This involves some detective work, which Jumper is familiar with because he watches TV.

If you hate bad grammar, this ain’t the book for you. Jumper writes like he talks.The Bones have knives and guns, but Jumper is creative with duct tape. Plus, his hobby is jumping off of things, like garages and trees, which surprises you if you ain’t expecting a guy to jump off the garage at you. He also likes to draw, and gives art therapy lessons to a little girl in the hospital with cancer. When it looks like the Bones want to hurt her, that’s about the last straw for Jumper. A guy can only stay all James Bond cool for so long, and you really ain’t that smart if you pick a fight with a guy who jumps off garages for fun.

It appeals to young adults who don’t mind mild violence and mildly offensive language. it also appeals  to writers and fans of literary fiction who appreciate some of the subtle language humor Jumper stumbles across and steps into.

Here is how the book starts:
Some people say I ain’t smart enough to have did what I done. But some of the guys who say that ain’t exactly Einstein Bagels themselves and probably ain’t as smart as stuff they done either. Sometimes smart and lucky is the same thing, which a guy should not get credit for even if they want to.

OK, so getting in a fight with the meanest gang guy in Denver wasn’t smart or lucky, I’ll give you that one. I shouldn’t of done that and I ain’t got excuses. And any time you see a murder, you got to figure you done some dumb stuff to put you in the wrong spot at the right time. So it would be fair to take off some of my brain points for being a murder witness, on top of the points for the unfortunate gang incident. But then you got to add some luck points for not getting killed myself, and some on account of the turtle. Since smart and lucky is a lot alike, as I already explained, I think my luck points raises my brain points back to a level playing field.

Back cover comments  by  Joseph L. Jeannotte, Ph.D. :
“Jumper and the Bones resonated with so many lessons that I try to teach in my fifth grade — taking chances, taking consequences, doing one’s best, the magical restorative power of little selfless acts, the inevitable miscommunications among friends, thinking outside the box, using one’s strengths, and accepting oneself— that I read it aloud to the class. It isn’t really a kids’ book, but they loved it. Like me, they absolutely loved Jumper. They reveled in the pseudo-swearing. They felt brilliant when they were able to make inferences and draw conclusions that evaded Jumper. They felt brilliant pretty often.

“Just as Jumper can connect with young and old, the book spoke to my fifth graders, to my twenty-year-old son, and to my old grouchy self. When you end a book and look at a class of tearful kids —crying because the happy ending is so surprising and so right­— that’s a powerful book.

“Jumper is one part Odysseus, one part Mother Teresa, one part Inspector Clouseau, and one part a less-driven version of you or me. He is utterly confused and, simultaneously, a genius. Jumper’s hashed grammar, leaping off balconies, persistent distractibility, and interactions with offensive effusive Greg, frail yet indomitable Mrs. Murphy, bossy bubbly and bald Linda, pompous philandering Dr. Anderson—the book is a feast of triumph for extraordinary everyday characters whom I swear I know.

Dr. Jeannotte had his fifth grade students read Jumper and the Bones and then write reviews of it. We had a little video conference with the author and those students and created a Facebook account primarily as a forum to post those video reviews. I haven’t “managed” the page much, so it looks clunky, but those reviews are priceless.  Jumper and the Bones on Facebook.  You may need to sign onto your own Facebook account to view them.

available as a paperback from Amazon and bookstores everywhere, as a Kindle edition or as an epub book from Barnes and Noble.