Naming vehicles is silly. On the other hand, I’ve named blank sheets of paper for a long time, and occasionally make money at it. I named one ream of blank paper “Jumper.” Others pages became Belinda, Marcus, Malcom, Billy Billy Billy, The Magician who was learning electronics, Miss Pounder the exercise instructor who inadvertently taught math, Bruce the Duck who saved the day, the evil Nightsmoke, Pon, Braindead the Algebra Student, and many more. Naming things is kind of what I do.

During the Pleistocene Era, I  bought a 1980 Dodge van for hauling my uncle and his wheelchair around. I drove it for years. “Big Blue’s” proud life earned him a small role in The Land of Debris and the Home of Alfredo. His subsequent owner emailed to tell me Blue had continued his brave adventures for a long time, finally going out in a literal blaze of glory on an exit ramp. By the time my uncle died, driving vans felt very natural to me. They were useful for lugging boxes of books, you could camp in them, and people thought they were clunky so you could get a lot more vehicle for your money. Each one had a unique personality.

Clearwater Publishing got a deal on a huge  gray van with some ugly but harmless body damage. We nicknamed it the “Clearwater shark;” which got shortened to “Clark.”  Then there was the beige 1996 Ford Aerostar minivan. It was a few years old but always started and had no body damage.  I named it Ipanema because, by my vehicle standards, it was “tall and tan and young and lovely.” When my sons needed something they could all use to move, I traded Clark to them for labor on a project. Later, when needs changed, I temporarily swapped Ipanema back for Clark. I’ve been driving the old gray shark for a while. Alas, Clark developed a blown head gasket and I had to put him down. He recently became an organ donor and I was pretty sad. But life moves on.

I just bought a fifteen-year-old GMC Safari van that already feels like part of the family, although it’s weird to have a member of the family whose heater and radio both work. But what to name it? 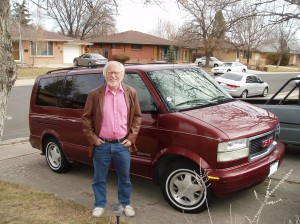 When asked to describe the color, the first thing that came into my brain was “Apache Red.” An earthy, brick color that conjures arid canyonlands. My favorite Native American was a hero of my childhood, Tonto. Technically, he wasn’t an Apache, he belonged to the “Fictional” tribe. But more importantly, is the name Tonto racist?

People who think it is may remember all the Tonto jokes from years ago (Lone Ranger and Tonto are surrounded by angry Sioux. “What should we do, Tonto?” “What do you mean ‘we,’ white man?”) and the Saturday Night Live skits that mocked Tonto’s speech. And the Lyle Lovett song (“If I had a boat…”) which implies he was oppressed: “Tonto did the dirty work for free.”

That’s just not the way I remember it. I was a pre-schooler when the Lone Ranger was on TV, so I was an early adopter.  Lyle Lovett and Jon Lovitz are a decade younger than me and only saw re-runs as children during the smoky haze of the 1960s. Who are you going to trust?

The Lone Ranger was powerful and mysterious, someone to admire and fear, but hard to identify with. He was a grown up, like a father or a principal, or a big third grader. You wanted him on your side, but you could not imagine actually being him. Tonto was the shorter guy in the background who didn’t speak unless spoken to. Like me. Maybe he didn’t understand all the big English words, but I didn’t either. The mean guys in black hats made fun of him and probably swiped his lunch money. But he was the one you could trust, who knew the cool secrets of Nature. He could make a campfire, or hide in a tree, or whistle up a coyote, or escape silently into the night without a trace.

More than that, he was completely loyal and honest, the best friend a person could ever hope for. When a grown up like the Lone Ranger got into trouble, we were all glad Tonto had his back. A few years later, the character Sam in “Rides Like an Indian” became my favorite Native American, followed soon by Chief Joseph, then Buffy St. Marie.  But I never lost my fondness and admiration for Tonto, the quiet guy in the background no one took seriously until they realized he’d just foiled their stage coach robbery. No matter what they did to him, he never once blew a head gasket.

It seems a shame that the folks who mocked this noble character have won out. I think that happens a lot.  Gerald Ford was our most athletic President and a complete gentleman but in our collective brains we remember Chevy Chase’s portrayal of him as a clumsy doofus on Saturday Night Live better than we remember the actual man. History distorts things, and so do movie remakes. I avoided Johnny Depp’s Tonto;  I love Depp, but I didn’t want to see a movie distortion of what was cool about the original. Imitations never get that part right.

Even as a kid, although I always wore my cowboy hat while climbing to work: 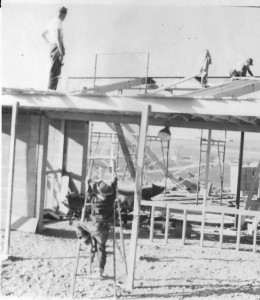 I often went bare-headed like Tonto when I was actually working, like helping to build Tony and Beryl Bernardi’s house: 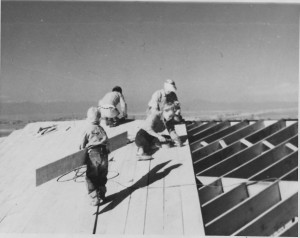 Notice that none of the grown ups pay any attention to the little guy hauling the lumber. They knew they didn’t have to.

Of course, Tonto rode a fine horse, and it might make just as much sense to name my van “Scout.” But Ford makes a Scout and this one is a GMC. I hate to bring confusion into the world.

The original Tonto story was pretty cool. It was the tale of an unlikely friendship between two men who society considered natural enemies. When the story got changed by comedians and musicians and well-meaning activists who viewed it through the prism of civil rights and oppression, Tonto became a symbol of something quite different. Maybe it’s time to rewrite the story to be closer to the original. Maybe it’s OK to name my van after an admirable character in an honorable friendship. To restore the story, not make a cheap imitation.

Because people remember the story better than the facts.