I’ve about given up on Angelina Jolie playing any role in Jumper and the Bones: the Movie, mostly because there isn’t a role for someone of her age and glamour. But also because no one is threatening to make a movie of it yet. That’s disappointing to many of you, of course, but I haven’t given up on AJ’s family.  For example, Brad could play Jim, the one-legged buddy who works at the thrift store and has a pretty heroic and unexpected role that I won’t give away in case you haven’t read the book. Or in the unlikely case that Brad hasn’t. Angelina’s father, Jon Voight, could play Officer Mike if he’d stop saying mean things about Obama. We would not want that vibe on the set.

I still think Angelina’s brother’s girlfriend  Ashley-Reign might be a good “Holly,” Jumper’s love interest. If you’re secretly trying to put the movie together, she sounds like a good actress and you could probably track her down from her website. From that website, I swiped a picture of her without permission, so if she wants me to remove it, I’ll do so. Before I do, let me point out that some of my 16 readers might not know her, so this is easy  and free publicity for her — publicity that could catapult her career to the next level. 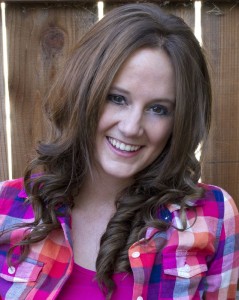 Imagine her with a pony tail. Doesn’t she look like Holly?

Because I’m not a stalker or anything, I only recently discovered that Angelina’s kids are really cute and already getting into the acting business. One of them is getting grief for actually getting paid for her acting. The message there is that some people who write about celebrities need to develop more interesting lives. Anyway, I’m thinking young Shiloh (who’s about seven) might be really great as the character “Linda.” Linda is  cute, but feisty and brave in the face of big problems.  Shiloh sounds like a total tomboy, and obviously about as cute as a kid can be. So, all of you who know the Jolie-Pitts, feel free to lobby on her behalf.  Again, I swiped a picture of her off the internet but will cheerfully remove it if her parents would prefer. Like I said before, I’m not a stalker. Honest. One call from Angie and it’s gone. 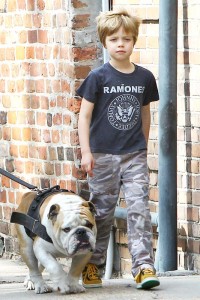 Can’t you see Shiloh as Linda wearing a baseball cap in the hospital getting art lessons from Jumper?  Me too.

I’d been thinking Angus T. Jones might be a good Jumper, but he’d have to bulk up. He’s been delivering killer deadpan humor since he was a tyke, and can act goofy or dumb when he needs to. Plus he’s got the bone structure to develop a linebacker’s body if he wants to. We would require that, of course, so he should probably start hitting the weight room right now. He’s become a lot more religious than either me or Jumper. On the other hand, he might actually approve the themes of the book of kindness, gentleness and standing up for what’s right. He’d also appreciate the lack of foul language and filth. He’s got a pretty firm opinion about filth.  I can’t say I disagree with him about the direction his TV show has gone recently.

He’s also still a little young at only 19, but then the movie hasn’t gone into production yet so he probably has time to age into the part. One problem is that he makes 300 grand per episode of Two and a Half Men, so he might not want to appear in a low budget movie. If Brad Pitt is playing the sidekick, maybe Brad could talk him into it. I’m pretty sure Angelina could. 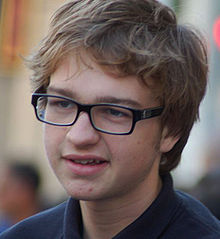 This picture is a year old, so maybe he’s already bulking up in anticipation of the role.

If there remain any aspiring screen writers/movie producers who have not yet actually read the book, I’m sure you can see that your window of opportunity is closing fast.  You’ll be happy to learn that Jumper and the Bones will be a FREE Kindle download this Saturday, Feb 16.

Here’s its page on Amazon:

A couple of my other books are also free that day, but I’ll let you track them down yourself. I haven’t cast the imaginary movie version of any of them. I’ll leave that up to you. For example, who would you pick to play the title character “Algebra” in “Algebra Unplugged?”